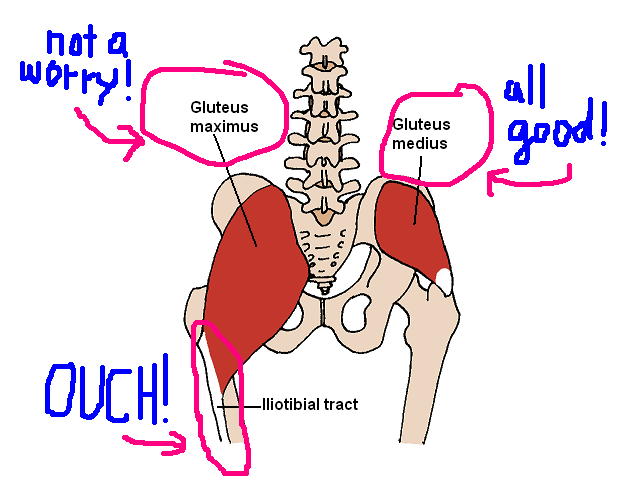 The doctor didn’t make me get an x-ray so this’ll have to do. It’s adapted from the source of all knowledge, Wikipedia. Note: not my real gluteus.

After ten days of self-diagnosis and scaring myself with imaginary surgeries, I decided to do what everyone else had been advising me to do and went to the doctor this morning. Nothing fancy, just my good old GP.

The knee that has been hurting to the point of driving me to tears for 10 straight days decided to stop hurting for pretty much the exact amount of time I spent in the doctor’s office. When the doctor started bending my leg and asked me to tell him when it started hurting, it never actually did. “If you had done that just yesterday, it would have hurt a lot, I swear” I assured him. Mmm Hmm.

My doctor is a fine kiwi chap. On my first ever visit, I remember he told me I was never going to make him rich. Silly man didn’t think I’d get into running, obviously.

I was his first appointment this morning and he welcomed me in a t-shirt, shorts and jandals. Almost five years in New Zealand should have made me blind to this but I can’t help finding it different. Different-good, of course. Different-bad if he accidentally stabbed his toe with <insert name for sharp object found in doctor’s office here because I didn’t go to medical school and, worse, never watched Grey’s Anatomy so don’t know the names of any of those things>. My point is that his relaxed outfit reflects his relaxed attitude. I’d normally worry about something like that, but when I asked him about how long I should go without running for, his answer was something like “you can run when it stops hurting. If you really have to run, try to do it on softer surfaces instead of concrete”. Translated into obsessive runner’s English, he basically ordered me to hit the trails this weekend. Doctor’s orders.

Anyway. He has a bunch of books with images just like the one above (minus my edits, so not quite as insightful as this one) and he touched my knee in a bunch of different places so I suppose he probably knows what he’s talking about. He’s convinced this is ITB syndrome. Iliotibial Band Syndrome, because he called it the proper stuff.

Sounds fancy. Also, kind of validating as far as injuries go. Look at me all real runner with a proper runner’s injury. But also, ouch. According to the fountain of all 21st century knowledge, Wikipedia, here’s what’s going on south of the muffin tops:

The iliotibial band is a superficial thickening of tissue on the outside of the knee, extending from the outside of the pelvis, over the hip and knee, and inserting just below the knee. The band is crucial to stabilizing the knee during running, moving from behind the femur to the front while walking. The continual rubbing of the band over the lateral femoral epicondyle, combined with the repeated flexion and extension of the knee during running may cause the area to become inflamed. (source: http://en.wikipedia.org/wiki/Iliotibial_band_syndrome)

I was told to keep icing it, keep taking Voltaren, advised to add Voltaren gel to the equation (because I’m not giving those guys enough money already) and stretch every day (every day? Like, seriously? People stretch every day?). I left the office before he had time to mention the foam roller so that’s my full list of recommendations. My jandal-wearing kiwi doctor also told me that I could do physiotherapy if I wanted to but, for this sort of thing, he finds that “it just doesn’t do much and it’s a real pain in the ass having to go to the sessions”.

After describing a potential treatment as “a pain in the ass”, he told me I could go home and Google more stuff about ITB syndrome to find out more. I like that my doctor openly tells me to look stuff up on the internet. He doesn’t realise I skim it for information on every little pain or itch and always end up dreading amputation. 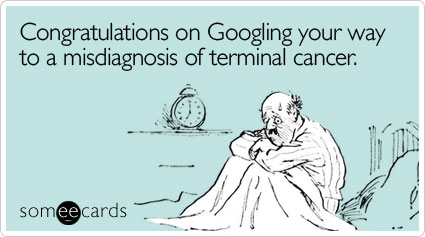 So far so good, though, I may just be able to keep both of my legs and, here’s the real shocker, this knee might actually heal completely. I’m looking forward to being reminded of what it feels like to walk properly.

(I know you’re all incredibly smart people but I read an article today about a woman trying to sell her kids on Facebook to pay for her boyfriend’s bail so, you know, the world is kind of full of idiots. Which is why I need to add to the bottom of this post that no one should ever, ever, ever, under any circumstance, take medical advice from me. Ever. Take advice from my jandal-wearing doctor and Google your pains away. No, really. Don’t.)