I took this photo while running, a pretty neat trick for me these days, considering I seemed to have lost my ability to stand up straight, let alone operate my phone camera while running. BUT THERE YOU HAVE IT.

I totally expected my post about the Riverhead Rampage to be a whiny one (which is okay because I’m pretty prolific at whining so those posts practically write themselves).

I was ready to tell you another sad tale of how my crippled ankle couldn’t handle the uneven terrain and the roots and the rocks and all the damn nature and I’d ended up on the ground covered in dirt and tears, looking for my self-respect. And then you’d say something nice to me even though what you really think is “why doesn’t she just take a break to heal up?” and I’d pretend that I was totally going to take a break, even though I’d actually be halfway through typing my credit card details for another trail event on a different browser tab.

WELL. NOT THIS TIME.

The Riverhead Rampage – my fourth running event in four weeks – turned out to be a day of sweet trails, time with good friends and free craft beer so, basically, everything I love about trail running.

I had a feeling it was going to turn into another DNF (and a reason to throw another pity-party for one over here) but I was still pretty damn excited about this brand spanking new event right on my doorstep. It had the sweetest forest trails you can find this side of the galaxy and it was sponsored by the local brewery so included free craft beer (because why use only Strava when you can give your Untappd account a good workout too?). It was pretty much guaranteed to be the perfect day, especially for people with two functioning ankles.

Riverhead Forest and I were going through a bit of a thing. My last big ankle sprain (you know it’s bad when you have to order them chronologically in your head) had happened there, a couple of months before. Matt, the good guy behind the inaugural event, had offered to give a few of us nutters a sneak peek of the course one day after work. It sounded awesome – getting a bunch of friends together for a forest run at dusk, followed by some of the best beer you can find, brewed right there in Riverhead. Everyone was excited.

So, naturally, I ruined it.

Just 2km into that sneak peek into the new course, I had another one of my spectacular falls and sat there in the forest screaming for – oh, I don’t know – it felt like hours, it was probably a decent few minutes. Michael eloquently described my screams as sounding like “someone being attacked by a dog” and, while I’m aware of the fact that I’m no Adele, I’d like to point out that an ankle sprain isn’t the time to pass judgement on anyone’s artistic abilities.

The good news is that we’re all getting pretty used to my shit. Because I’m careful enough to surround myself with the best running buddies around (but not careful enough not to splatter myself on the ground every time I run, apparently), they all took turns to piggy-back me out of the forest (so, really, they all got their workout that day) and, instead of the hospital, this time we knew better and headed straight to the pub, do not pass go do not collect $200.

Fast forward a few weeks, a few races and a few dozen metres of tape and we were all toeing the start line for the event, inside the Riverhead School grounds. A week after the Hillary, and marking four events in four weekends, all I could think about was getting to another finish line. If I could do it without limping (much), that’d be a very welcome bonus.

I decided to be careful and take it really easy, knowing I’d be running past the exact spot where I’d fallen not very long ago (luckily, my spatial awareness on the trails is close to non-existent so, in the end, I didn’t even recognise the spot when I ran past it so trauma avoided).

The first few kilometres through the forest went by and I kept going, slowly and steadily, sometimes a little too slowly, sometimes a little less steadily. But, these days, a run without a fall is a victory in my books. I really just wanted to finish, regardless of how long it’d take. I already had my ticket for a free beer and my only goal that day was to cash it without having to limp to the counter.

And then something surprising happened: I ran pain-free. And for a few moments here and there, I even ran worry-free. Months of running on a sore ankle have got me used to constantly worrying about where I’m putting my feet with each step – it’s a mentally exhausting game that I don’t like playing (especially because I often lose). Not this time.

The long stretches of forestry road helped my confidence and I managed a good few happy kilometres of genuine worry-free running, a feeling I had started to forget about. The rocky terrain near the finish wasn’t enough to wipe the stupidly smug smile off my face – although it did slow me down to almost walking pace.

So there you go. I didn’t screw it up. I got to cross the finish line of one of the happiest runs I’ve had in a long time – with the peacefulness that I get from running on my own and the excitement of knowing my whole running family was out there on that course too. We put our free beer tickets to good use at Hallertau and sat around drinking in the sun, no piggy-backs or painkillers required.

(I did momentarily roll my ankle stepping out of the car near the brewery but this blog has had enough embarrassing episodes to last me a lifetime so I’m going to go ahead and skip that one.) 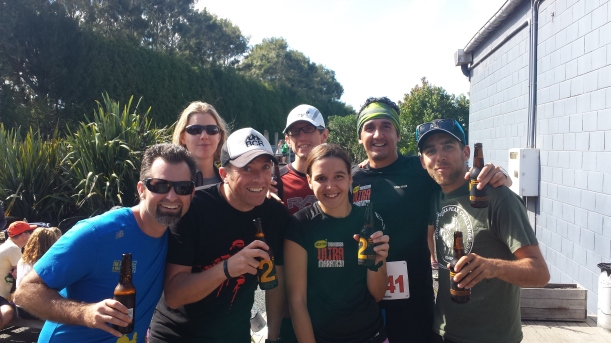 While the ankle isn’t 100% recovered and I still have this weird feeling of not having any balance standing on my own two feet, that finish line got me another giant step closer to where I need to be.

The day after the event, I got on a plane to Australia and have since parked my ass inside a campervan, touring the outback (having only run once in the last week and a half), occasionally raising my feet up onto the dashboard (that’s 1/4 of the whole RICE thing done right there) and even sometimes remembering to do the ankle exercises the physio recommended before I gave up seeing her due to my inability to take any of her advice.

Also, Riverhead and I are on good terms again. This running thing isn’t so bad after all.

The true sign of a good time is putting a load of laundry in the machine and having to set it to “very dirty” (which, thankfully, is an actual setting on my machine) and cross fingers your clothes will go back to their real colour.

That’s what happened today, after running the XTERRA event in Riverhead (event 2/6 of the series, after Shakespear Park).

Riverhead, in case you don’t know, is a forest in Auckland where all the mud in the world is kept and it was the stage for the second event of the XTERRA series.

This morning, the weather was miserable, my legs were heavy and my head hurt a bit from not drinking enough water. I didn’t feel like I should be running.

But I should know better than to doubt the ability that the trails have to make everything better.

It all started looking upwards when I met up with some friendly faces before the run even started (including people who knew me as SGG before they even met me as Vera and still wanted to hang out with me anyway). I was also worried that, without proper trail running shoes and all that talk about how clay is just the most slippery thing ever, I was going to end up with two broken legs.

Once the run started, all the climbing and sliding down muddy trails felt far too fun for my crankiness to survive and I ended up having a blast (without breaking legs in the process). I wasn’t much of a fan of the slippery climbs, with my old road running shoes, but thankfully trail runners are the nicest people you can find and with a push here and a hand there, everyone made it to the top (even me).

The weather cleared up just enough for us to get our running done before the rain returned and the views from the top of our steepest climbs were nothing short of amazing (made slightly less amazing by the fact that I had to quickly hold onto something as I was climbing my way to the top of one of the hills and accidentally grabbed a bunch of gorse).

I was slow and took a while to get my mind in the right place but caught myself smiling like an idiot as my feet dug through mud pits and mud splashed everywhere. If there is one secret to enjoying muddy trails, it’s really to just not give a shit. Once you stop caring about where mud is going, then you can just go for it.

My hands were so caked with mud I didn’t dare take my phone out for any photos so I made you a really realistic representation of what I’m pretty sure I looked like from behind.

And here’s another super artistic illustration of how it actually felt to get through that mud.

Ski lessons came in handy dealing with the slippery downhills and I manage to only fall on my ass once, an absolute victory in my books.

I can’t say I loved every second of the run today (definitely didn’t feel any love for the holding-onto-a-gorse-bush bit) but, once I got into it, the time I spent enjoying it far outweighed the time I spent in the beginning wishing I was back in bed. After crossing the finish line, I got to my favourite part of these events – the cold cider + sausage + friends combo.

I’m counting this run as training for the Tarawera Ultra. Some bad news for volunteers at that event next year, though: my run today was only just over 1/6th of the length of Tarawera (since I’m entering the 60km) and, judging by how long it took me, I suggest you take sleeping bags.

But for now, I’m going into the new week after a fantastic event that brightened up an otherwise pretty dull Sunday. Roll on Waiuku!

Now I’m off to get the mud off my shoes, which is a whole other workout in itself.

Speaking of shoes, I’m going to pour yet some more money into this running thing by buying a pair of proper trail running shoes, to avoid having to deal with any more of these one-step-up-three-steps-down hills. I looked at the Inov8 tent at the event and told the lady I’d go back after the run but was far too muddy to try anything on. Do you have Inov8 shoes? Love them? Any other brand I should be looking at? Spill the details! 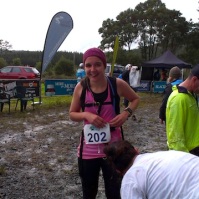