You know you really love trail running when you willingly give up the comfort and warmth of your bed for it before the sun is even up and then end up riding a massive runner’s high for the rest of the day, even hours after leaving the trails.

That was my day today – a whole morning out on the trails with a bunch of other crazies who also thought that was a good way to spend their Saturday morning, followed by an afternoon and evening of grinning from ear to ear like an idiot because of the morning adventure. Who needs drugs when you can just run your ass off instead? Today was one Ryan Gosling visit short of the ultimate perfect day. 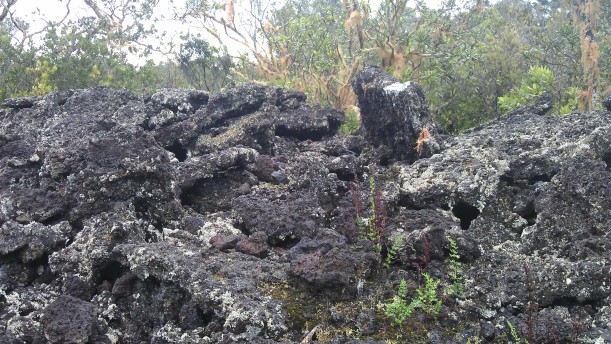 The trail of choice was Rangitoto but, instead of the planned Rangitoto Romp (which I’d done before), we chose a different track to the top, and stopped by the lava caves on our way back down to the wharf.

After a week of pretty much non-stop rain, it was great to finally have some dry weather (and, from mid-morning onwards, even stunning blue skies – high five, weather gods!). The views from the volcano are just one of the many good reasons why I’m never going to say no to a trip back to the island. Seeing the Auckland skyline from afar gets me all in love with the city every single time. 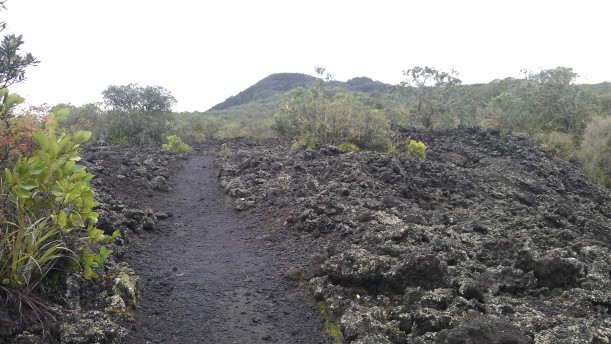 The other reason would have to be the island itself, really. It’s so easy to go about our days and forget how amazing it is to have a 600 year old volcano less than a half hour ferry trip away from the city. Raw lava, loose scoria, the largest pohutukawa forest in the world, and an unspoilt moon-like landscape to explore. If everyone in the world had one of these at their doorstep, we’d all be much happier people.

And kidney ferns. Kidney ferns are adorable, all curly and cute and everyone should get to take photos of them.

Did I mention I love Rangitoto? And that it’s after 10pm and I’m still on a runner’s high?

(Thanks to the awesome group of people who ran with me on Rangitoto today, including Chris and others who found this blog before meeting me in real life and decided that hanging out with me was a good idea anyway. Fools.) 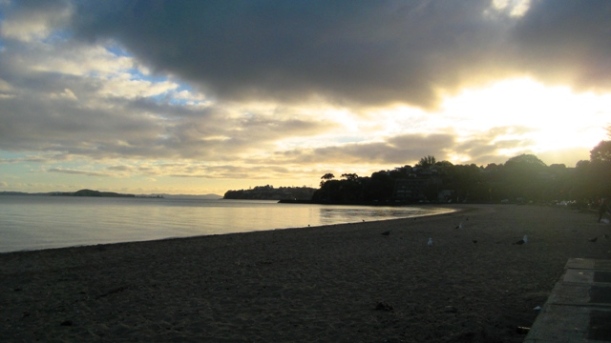 A sunrise. I don’t witness these things often but I’m told they happen every day and not just on race days.

YOU GUYS! I think I’ve got it. The secret to running a really good race can sometimes be a lot less to do with preparation, training and tapering and a lot more to do with just chilling the heck out and heading into it without much planning.

Well, maybe. Don’t listen to me, ok? My only doctorate is in kitty cuddles and even that one is just honorary. But the fact is that the experience from last weekend showed me exactly that and I’m going with empirical knowledge here. So let’s recap, shall we?

I headed over to the Auckland Domain on Saturday to walk with Kim Allan (an experience I will hopefully be posting about in the next few days, once I can come up with the right adjectives to describe her epic feat). I wasn’t the only one there. Kim had the support of lots of other people, runners and non-runners, and, for a few hours, we all became our own little group of friends. One of the guys I was talking to mentioned the ADRA half marathon that was going to be on the following day in Mission Bay. I had read about it but decided against it a couple of weeks before. However, as he started telling me more about how nice a course it was and how the weather looked like it’d be perfect for it, I started feeling the bug bite. Knowing I absolutely had to get out of the house for a long run on Sunday anyway, as part of my less than stellar marathon training, I figured having some extra motivation wouldn’t be a bad idea. 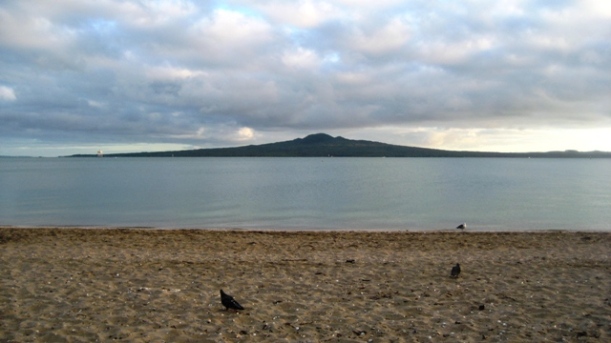 Living in Auckland sometimes makes you forget not everyone can run alongside views like this one. Volcanoes are awesome.

On paper, it wasn’t a brilliant idea but that’s never stopped me before. I’d run 4 times that week and ended up walking 16km that Saturday (and getting sunburnt in the process). Tapering was non-existent. The only thing I had time to do, as far as preparation for a race goes, was a pasta meal for dinner on Saturday night, just in case. I didn’t even know for sure whether I’d be able to run it. Registrations had closed online so my only chance was to drive there at OMG o’clock on Sunday morning and check if I could register on the day. So I inhaled my pasta, used the potential half marathon as an excuse to have a bucket load of ice cream and set my alarm for 5AM (when 5AM was only about 5 hours away).

I thought to myself that if the alarm went off and I didn’t feel up for it, there’d be plenty of other half marathons to run and I could still go for a long run later on in the day. But then 5AM came around and I jumped out of bed with the usual race-day excitement. I left home while it was still dark and crossed fingers that they’d still take my registration. Of course the title of this post alone tells you they did and, at 7AM, I had my bib pinned on my shirt and was lining up at the start line with a bunch of other runners. My kind of sunday morning!

The route followed Auckland’s waterfront from Mission Bay to St Heliers and back to the Port (where we looped around back to Mission Bay) and was similar to the Cathay Pacific half marathon I ran earlier this year. There were only a couple of hills at the start (Cliff Road and I have a love-hate relationship but only in the sense that I love to hate it) but most of the course was nice and flat. The stunning weather was a welcome gift too, especially since Auckland has this habit of giving us a good week only to then present us with a stupidly wet weekend.

There were some times when I felt the tiredness that comes with not tapering but I was feeling strong enough to know I could finish. When I got close to the 16km mark, I realised I had a chance to get a personal record on this one. I got a little too excited about it and considered my chances of a sub-2h but quickly dismissed it. As nice as the course was, my legs felt heavy and tired (handy tip: do not walk 16km in the sun the day before running 21km) and I was not doing my best at pacing myself either. I was just happy with the possibility of beating the 2:05 I had been sitting on since the Whenuapai half marathon back in April. 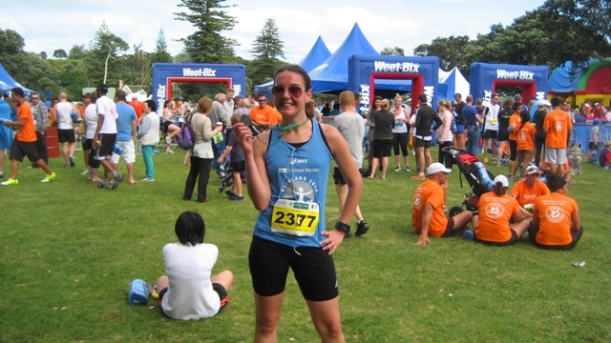 I swear not all photos of myself have me in running clothes soaked in sweat. No, really.

And I did beat it. 2:03:06 is not quite the sub-2h I keep chasing but I am now 2 minutes closer to it then I was before this last minute decision to run this race. It was also a pretty good little confidence boost for marathon training. I celebrated the best possible way, by having a nap, and now I’m preaching the benefits of not over-thinking (or even thinking) running events and just going for it on the day. Maybe there is some truth to Nike’s slogan after all.