Mike Allsop at the finish line of his 777 project

Today, Mike Allsop completed his 7 marathons in 7 continents in 7 days challenge. The man is a legend. There’s no way around it. He also did it all for charity, to help kids living in poverty. He’s as fit as they come (you have to be, to take on such a mammoth task), as crazy as it gets (see previous parenthesis) and apparently a pretty decent human being too.

Mike ran a marathon a day in each of the world’s continents last week, starting in the Falkland Islands on Monday, moving onto Santiago, then up to LA, across to London, down to Casablanca, then to Hong Kong and finally Auckland, today.

I have barely moved from bed in the last 4 days.

It all started kind of turning to custard on Wednesday. First I had one of my old school migraines. Later that day, came the sore throat and the body aches.

On Thursday, I dismissed the cold as “one of those 24h bugs” and ran 21k after work, the final long run before the marathon. I figured if I got worse, at least the last long run would be done and out of the way and I could just focus on recovering. Good thing I decided to focus on recovering because after I got home from that run, I nearly collapsed in the shower and got in bed with chills and fever. “Not dying” achievement unlocked. But I did sweat bucket loads throughout the night, which is a detail I’m sure you appreciate me sharing with you.

On Friday, I could barely keep my eyes open. The world was simultaneously freezing and on fire and there wasn’t a single muscle in my body that wasn’t making a point of telling me it was there. I could walk from the bed to the kitchen without a problem but then the return trip back to bed was a bit of an effort (which isn’t the way you want to feel, the weekend before your marathon). Saturday is just a foggy memory in my head. I remember cups of hot tea, different types of medicine, a whole lot of tissues everywhere, and an entire day watching old episodes of Big Bang Theory, trying not to stress out about the marathon, interrupted by intervals of stressing out about the marathon.

Today was the fourth day of my self-pity party. Then I remembered that Mike Allsop’s team had set up an event for people to join him for the final 5k of his last marathon this afternoon. There was no way I could run it, with my clogged up nose and my coughing and sneezing fits. But I thought some sun would probably help me so made the last minute decision to head down to the Viaduct just to cheer Mike on from the sidelines.

Because I wasn’t going to run, I didn’t bother getting changed from the clothes I had been wearing all day – a t-shirt and a denim skirt because sometimes I wear clothes that aren’t for running. I took my purse with me and didn’t even bother with my iPod or running watch. I got to where everyone was gathered to join him for the final 5k and hung around for a bit to see him run past. I didn’t get a supporter’s t-shirt (those were for runners joining Mike and I wasn’t going to join Mike) and I didn’t pose for a group photo with all the runners because I wasn’t going to run. I was all on track with my being-responsible-and-not-running-because-that-would-be-stupid goal. My plan was to see him there and then walk to the finish line and watch him cross it (he was going the long way around but the finish line was actually only about 1k from where the 5k group was joining him).

And then… well, then I realised I have a problem. Mike Allsop ran past, high fiving everyone, looking like he hadn’t just travelled across the globe running a marathon a day for the last week. Ultrarunning legend Lisa Tamati ran alongside him. Dozens of people joined them for the last 5k and I watched them as they ran into the distance. I stared at my flowery canvas shoes (no socks), my denim mini skirt, and the purse I was holding. I thought to myself “You’re really sick and you’re not dressed for running. That would be really stupid.”

So of course I took off running and joined the group. Let’s face it, this is probably the only time in my life I’ll ever get the chance to run near Lisa Tamati at a pace I can keep up with. I’d rather have this cold linger around for an extra day or two (nothing some extra pills can’t help with) than miss out on running with these two legends.

When Mike crossed the finish line, he shared stories about his last seven days of adventures. He said that, at one point, I think during his second marathon, one of his knees hurt so bad he couldn’t even walk on it. He sat on a rock wondering how he was going to be able to go on. Then his phone alerted him for a message on the project’s Facebook page, from someone telling him that his adventure had inspired them to go out and start running. And that’s all he needed to get off from that rock and keep on going. On top of raising a hell of a lot of money for KidsCan, Mike is also an inspiration to a bunch of other people, runners, aspiring runners and runners who feel like they probably shouldn’t run but can’t stop themselves anyway. I felt almost ridiculous not joining him for a 5k because of a cold, considering how much he had gone through in the last 7 days. My excuse was no excuse, really. Even if I had to be the dork doing it in regular shoes and a denim skirt. 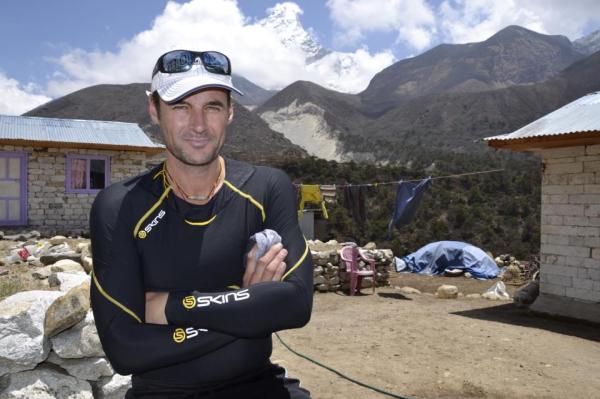 I just wanted to give you  a heads up that when it gets to Monday, February 18, and you tell everyone at work you’ve got Mondayitis and Monday sucks and the day is dragging on, your day won’t be more exhausting than Mike Allsop’s day.

And when it gets to Wednesday, February 20, and you’re all like “hump day, yay!” and “roll on Friday!” and stuff like that, your week still won’t have been as exhausting as Mike Allsop’s.

And when you get to Friday, February 22, and you’re all “I’ve earned this beer!” at Friday drinks with your workmates, you will not have earned that beer more than Mike Allsop’s.

So, 32 days from now, when you wake up and your eyes feel heavy and your bed feels too comfortable to leave, think about Mike Allsop and life won’t feel so exhausting anymore. He’ll be out of bed, running a marathon on the Falkland Islands. One of the seven marathons he will complete in seven different continents in just seven days.

It’s as insane as it is inspiring (and if you’re a runner, a marathon in each continent is pretty much the ultimate item on your bucket list). On top of that, he’s doing it for a good cause, to raise money for KidsCan. Mike is aiming to raise $10,000 for the charity so, if you have a dollar or ten weighing in your pocket, drop it here.

He is no stranger to big adventures but the 777project will be his biggest challenge to date (and I’m not entirely sure how he’s going to top this one). In an estimated 7 days and 20 hours, he will fly all over the world and run marathons in: Antarctica (Falkland Islands), Chile (South America), Los Angeles (North America), London (Europe), Casablanca (Africa), Hong Kong (Asia), and finally Auckland (Australasia). I got tired just from typing this paragraph.

Mike has his itinerary online with the start times of each marathon so, if you are in any of these areas, maybe go hand him a drink and tell him he’s awesome.