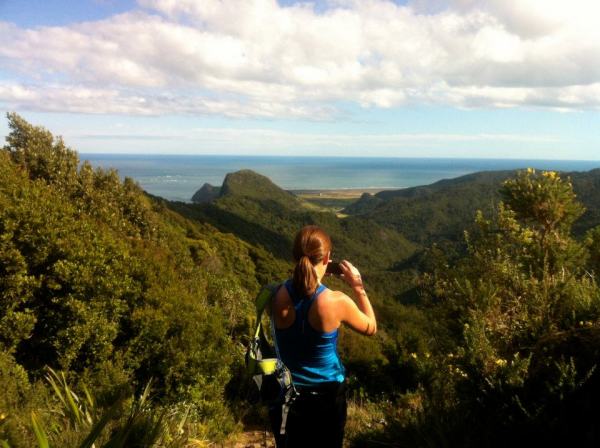 You know how sometimes you ask people why they do a certain thing and they answer “because I can”? Yeah, that’s not why I signed up for this 35km trail run. Quite the opposite, actually. I signed up because I didn’t (don’t) think I can do it. Which is exactly why I’m going to try.

Today we are exactly one month away from the big day. Am I ready? Not even close. But of all things I’ve tried to do to somehow prepare for this, running an off-road half marathon for the first time in my life yesterday was, by far, the best one.

It was a last minute decision, made after a short night run with S. on Monday after work. We sported some sexy head torches and headed up and down beach reserves along the harbour, when we realised we’d have a public holiday just two days later. I was jet lagged after flying in from the US the day before from a week of very little running and so the idea of running 21km in the forest on Wednesday sounded nothing short of a nightmare. So I agreed to it.

And then came Wednesday morning. We set on the track after grabbing some sugary goodness from a bakery on our way to the beautiful Waitakere Ranges. After stuffing down a strawberry jam and cream pancake while trying not to die on a windy gravel road on our way to the Whatipu car park, we started running.

And then about 1km into it, I stopped (for the nth time). My legs were as heavy as rocks and I was breathing like someone in the middle of a full-blown asthma attack. So I panicked and threw a tantrum, of course. Told S. I’d wait for her in the car, that trail running was not for me and I was done with it, that there was no way I could ever do it. S. did her part and told me to snap out of it. She said I could do it, that it was all in my head. Don’t tell her I said this but, yeah, she was right. She must have been right because we ended up running our little hearts out in that bush and loving pretty much all of it.

It helped that the landscape was breathtakingly beautiful (giving us an excuse to stop every now and then for some photos) and it also helped that the weather was nice.  It also helped that, rather than being the chickens I wanted us to be when we took off, we ended up making the decision of running the whole damn thing (we had the chance to cut it down to 15km at an intersection and still decided not to).

I had to keep reminding myself to breathe properly and yes we did walk when the inclines were too strenuous for our poor little legs. But we also ran. And ran. And ran. And, about halfway through it, I even admitted how much I was enjoying myself, prompting S. to remind me of my little brain spasm at the start of the track.

So yesterday, after a month of training (with a week to forget, training-wise, in the US), I ran my first ever off-road half marathon. I got home with very sweaty clothes, mud and even blood on my legs , I swallowed a bug in the process (whatevs, extra protein, right?).  But S. was right, it was all in my head. And once I convinced myself that I was going to do it, I did it.

4 thoughts on “a last minute off-road half marathon”