When I got on that small propeller plane from Port Vila to Tanna, my only purpose for the 26 hours I would be spending on that island was to go up to the top of Mt Yasur on New Years Eve. In fact, going up to the top of that volcano on New Years Eve was pretty much the main purpose of my entire trip to Vanuatu. Anything else, I thought, would be bonus. Standing on top of that volcano is still one of the best experiences I have ever had and certainly a highlight of my trip to Vanuatu. And then, on the morning of the first day of 2012, we asked Tom, the Ni-Vanuatu that built the bungalow we were staying at on Tanna, if he would help us get to a kastom village.

I had done a fair bit of reading on kastom villages in Vanuatu and on the previous day, taking the long way round to the volcano, we had stopped at the main John Frum village for a few brief minutes. We wanted to find out more about these tribes and their fascinating way of living. Tom got his 4wd truck and drove us to the highlands of Tanna. We went as far as the 4wd could go and then hiked a little over 1km into the jungle to get to this tribe, completely isolated in the highlands. 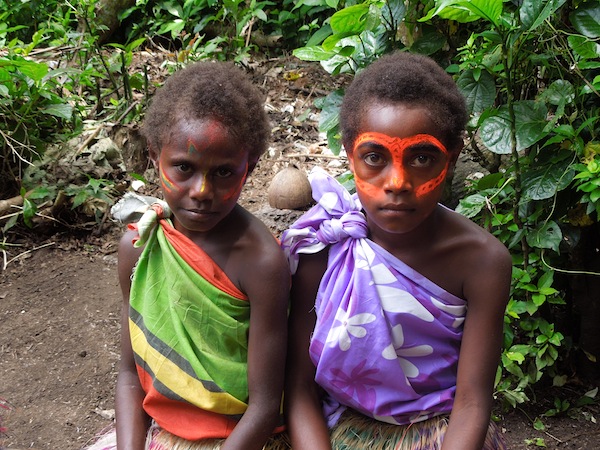 To say we were amazed by what we experienced with that tribe would be an understatement .As the only two white people visiting them at the time, we felt like we had made a great group of friends (who, apart from two girls, didn’t even speak our language).

Speaking of that, as an aside, one of the things that fascinated me the most about Tanna, being a bit of a linguistics nerd and all, was the fact that the whole island is only about 45km long (so, really, quite small) and yet there are apparently five different languages spoken by the different tribes. Languages so different that different tribes cannot understand each other. Our drivers on the previous day had to stop to ask for directions and had to use Bislama (the Pidgin English from Vanuatu) to communicate with the guy they were talking to (the guy was holding a machete but thankfully communication was successful and no one got hurt). It is quite amazing to think that some of those tribes, living so close to each other by our standards, never even cross paths, never communicate. That’s how isolated they are. Isolated from the western world, isolated from neighbouring tribes. That isolation leads to truly special things like the survival of those different languages – how amazing is that? But anyway, enough with the linguistics nerdgasm.

We were welcomed to their common area and, among other things, one of the women tied a grass skirt around my waist – I should have remembered that I’d read that above the knee shorts were not appropriate attire for a woman visting a kastom tribe. Oops.

We only spent a couple of hours with them but they were filled with special moments. They showed us their traditional dances, hitting their feet so hard on the ground it almost shook beneath us again like we were still on top of the volcano, they showed us how they attack other people with bow and arrows and darts(and I showed them I’m a total loser when it comes to handling all of those), we planted kava and taro with/for them…

At one point, C. was invited to drink Kava with the tribe chief and went away while I stayed with the women. Women aren’t allowed to drink kava with men. I thought I wouldn’t be allowed to try it at all (and I can’t say the thought of not trying a drink made from roots of a plant that a group of boys chewed and then spat out was bothering me). But a few minutes later, while one of the two girls of the tribe who could speak English was explaining me that she had to walk a full day each time she went to English lessons on another part of the island, a little boy came and handed me half a coconut shell full of kava. I took a sip, my mouth went numb to the point when I couldn’t tell whether it was open or closed, I remembered that I was drinking what the kids had been chewing and handed him back the shell. C. later told me that the kid took my shell back to the men group and the tribe chief drank the rest of it as well as the rest of C.’s shell in one go. Respect. To minimise the effects of the kava, the chief then offered us taro and coconut he had cooked on the fire. I committed another faux-pas by looking at the chief in the eye as he handed me the food. He didn’t seem to mind too much, which was lucky because I saw how good those guys are with the bows and arrows.

One of my favourite moments was when, probably influenced by Kava (I’m kind of a lightweight when it comes to that sort of stuff), I decided to join them for some of the dances. The kids immediately held my hands and guided me through the different moves. They looked up at me every now and then and smiled and I smiled back and the fact that we couldn’t communicate with each other verbally was not a problem. In the end, every single person in the tribe shook our hands. A couple of the girls decided to hug me and touch my face with theirs so I got some of their traditional pain on my face. It was a gesture of friendship, I didn’t need to speak their language to understand that. I replied with the only Bislama I knew and just said “tangkyu tumas”.

What we got in those two hours was a unique glimpse into a way of living so different than ours, it is hard for me to get my little western brain around it. It is a way of life that has not changed in centuries and, judging from how happy these people are, is not likely to change anytime soon. In fact, from what I read and could gather in Vanuatu, it’s not like these tribes are unaware of western civilisation or alternative ways of living. They know other ways of life exist, they know about TV and other western inventions. They want nothing to do with it. And when you look at the size of their smiles, you realise they don’t need any of that to be happy. And you leave wondering why you do. 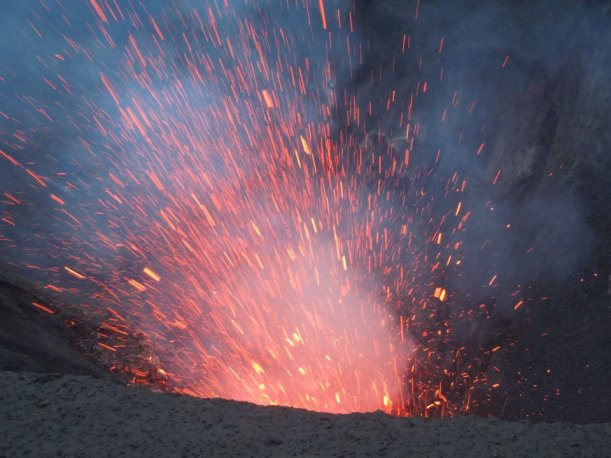 Happy 2012, everyone! What you see above is Mt Yasur, an active volcano on Tanna Island (Vanuatu) violently spitting lava. We took this photo on the evening of the 31st of December, last week. This was how we said goodbye to 2011 and how we greeted 2012: standing on top of an active volcano, the ground beneath our feet shaking violently and the noises of a rumbling volcano echoing through the valley. It was pretty much the best new years eve ever. I didn’t see any fireworks, for the first time in my life on a new years eve, but I still had the best fireworks display one can ask for, courtesy of mother nature.

I have just returned from a wonderful trip to New Caledonia and Vanuatu and have about 6943 posts I want to write about the amazing time I had on those islands. But first, and you’ll understand my reasons for being a bit late to this, time to reflect on the 2011 resolutions and make some for 2012.

2011 was the very first year of my life when I made new years resolutions and actually carried them in my mind throughout the year, rather than forgetting them within the first week. Keeping those resolutions in mind made my year a truly spectacular one. It didn’t just end in a spectacular way, it was actually a really good year.

It’s not like anything particularly major happened. I’m still not a Lotto winner (possibly because I never remember to buy a ticket). But several little and not so little things made 2011 a really good one. I didn’t fullfil all my resolutions 100% but I worked on them throughout the year and having those goals made it feel like everything I did actually mattered somehow. To sum up:

enter 12 running events – sort of check. I entered 11. Sickness led me to pull out of one in June and I thought I’d make up for it in December but sickness was, once again, to blame. Still, two of the eleven running events I entered were half-marathons – which is twice the number of half-marathons I was planning to run, so I’m pretty happy with that.

run a half-marathon – check! And check!

write more (for fun) – I didn’t do quite as well on this one as I’d planned but I did start this blog so that should count!

visit my family back home – Yes! And it was as amazing as always!

learn to swim – I’m going to put a green tick on this one because I actually hardened up and took a course back in July. Call me weird but I don’t like swimming. But I did it.

join couchsurfing and host someone – done!

do a multi-day hike – another green tick! It was just a 20km hike with a night at a hut but it still counts.

give up soft drinks – ha! Not sure what I was thinking when I came up with this one.

See? Not too bad. There were some other things I had in mind when the year started like get more into crafts and have little projects going on but that really didn’t happen and I abandoned that idea pretty early on.

What about this year? My goals for 2012 are actually not all that different than my 2011 ones. This year, among other little things, I hope to:

eat better – something I sort of started in 2011, probably due to all the running madness, but haven’t focused on enough

and a few other things that were already on last year’s list (like visiting family again). So there you go, not much but enough to keep me out of trouble.

Here’s to a wonderful year!