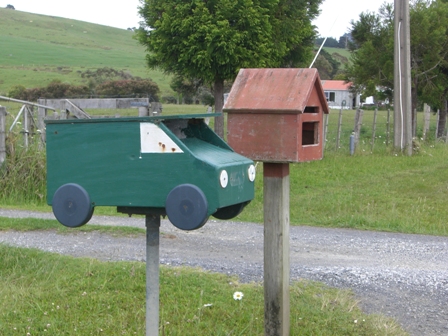 You’ve probably heard all about New Zealand’s many fences (the jandal fence, the bra fence, the toothbrush fence, even the bicycle fence), but there are plenty of other excuses for “emergency” stops on the side of the roads around here. These are some of the examples of the quirky letterboxes I’ve came across during roadtrips around New Zealand. Using microwaves as letterboxes, for example, seems to be pretty common, as soon as you leave a big city,  but I can’t help smiling every time we drive past one.

One of the great things about taking a roadtrip in a campervan is the ability to stop wherever pleases you for however long you feel like it because there is no set time to check into a hotel or any other kind of schedules. As a result, you might find yourself stopping for a quick snack bread or just to admire the scenery and find stuff like, oh I don’t know, teddy bears hanging from trees in the middle of nowhere in Australia.

Cute? Creepy? I’m not entirely sure. But photo-worthy either way, I reckoned. These photos weren’t even all taken on the same piece of road – we actually drove between each of them. The whole idea behind these bears on trees remains a mystery to me. Upon returning to this side of the Tasman, I spent more time than I’d like to admit searching for the reasoning behind this. Strangely, the internet hasn’t been able to solve the mystery for me. 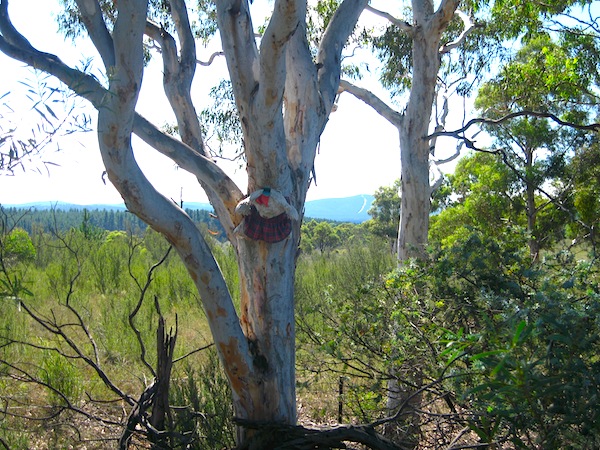 This forum thread was the closest I could get to an answer. This Wikipedia entry about Kings Highway mentions the bears in the “notable features and landmarks” section but offers no explanation (except maybe an implicit relationship between the bears and the nearby “Pooh Bear’s Corner”, a small rock cave near the top of the Clyde Mountain pass. The bears are also mentioned here. Other than that, I found zero. nada.

Teddy bear spotting along deserted roads has all the ingredients to be a fun activity but I’d really like to know why there are dozens of these along this particular Australian road. Do you know?

Imagine driving along a lonely piece of road for a while, without much to look out the window for. Hardly a car goes past because, lets face it, it’s Australia, you’re out of the city and so there aren’t that many people around anyway. All of a sudden, you spot this colourful shape in the horizon and, as you get closer, you might even be tempted to think you’ve somehow just jumped into a cartoon.

You’re probably on the Hume Highway in Australia and you’ve just come across the Ettamogah Pub, which many consider the most photographed pub in the world (and here are some more photos of it, just to help ensure the statement is accurate). It is a quirky place that adds a little more fun to your Australian roadtrip. It’s definitely worth parking the campervan and going for a wander around and having a drink, or even a meal. We didn’t try the meals so I can’t comment on the food. It was the middle of the afternoon of a really hot day so we settled for an ice cream, knowing we still had a lot of kilometers to cover on the road that day. 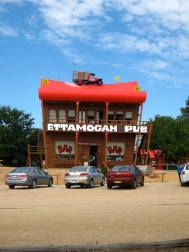 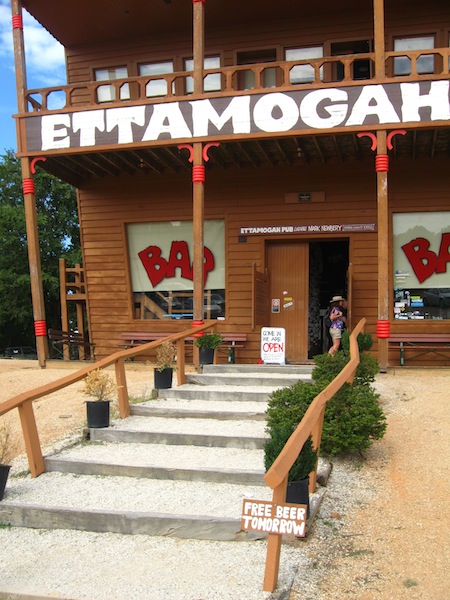 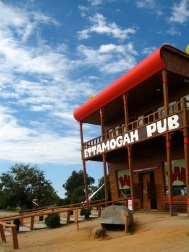 This particular Ettamogah Pub, in Albury (New South Wales), is the first one to have been built. Since then, a few others have opened in Australia, including in Sydney and the Sunshine Coast, but this one remains the original one. Come to think of it, the “most photographed pub in the world” accolade, if true, is probably valid for the Sunshine Coast or Sydney replicas. This particular location might just be a bit too out of the way to ever have the “most photographed” anything. But I could be wrong (no, really).

Last May, the owner announced a $3 million revamp for the pub. I’m not sure if any work has been done on it since then or not. These photos are from our trip over Easter 2009. We got a spaceship campervan for seven days and I had my first campervan-holidaying experience ever, which I really should blog about in a separate blog post. Spoiler alert: it ends with the campervan parked in a motel carpark on the last night and us requesting “any room that has a functioning hot shower, please!” to the motel receptionist. 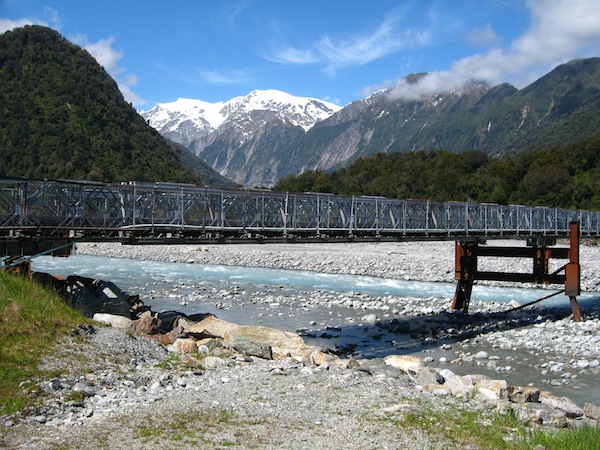 In the beginning of summer, my parents visited New Zealand for the first time and we took them on a little whirlwind tour of the country. It was a jam-packed month during which we tried to made sure they got to see the most amazing sites (including a couple of places I’d never been to either, like Milford Sound). We couldn’t believe how lucky we were with the weather (even if mum and dad found it a wee bit chilly most of the time). The sky was clear for 99.9% of their time here and the southern lakes were a real beauty. 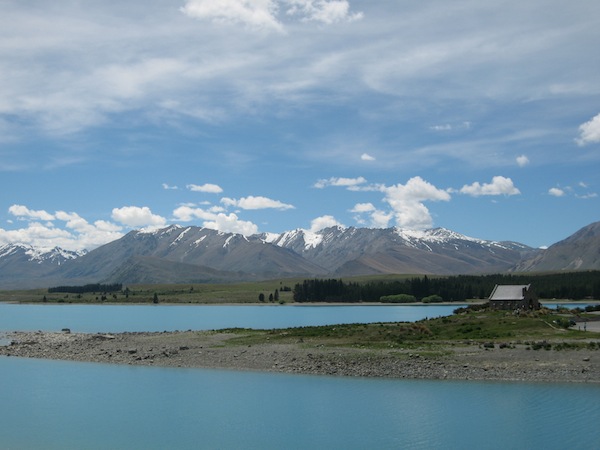 We started off our southern roadtrip in Christchurch (which my parents were fortunate enough to visit pre-earthquake) and headed west across Arthur’s Pass to Greymouth. From there, we drove south to the glaciers and then to Wanaka and Queenstown, before heading to Te Anau and Milford South, and all the way down to Invercargill before starting the journey back up north through Dunedin, Oamaru, and a bunch of other cute little towns, back to Christchurch again.

The poor rental car clocked up a lot of kilometres but we still had plenty of time to stop and enjoy the amazing landscapes. I honestly can’t remember how many photos we took of this lake (Lake Pukaki) but we just couldn’t believe how beautiful it looked. We had driven past it earlier in the day and it hadn’t been quite like that but I guess the real still air with zero wind caused this image in the afternoon. I was so pleased they got to see it like that too.

This was my third trip to the South Island and every time I go I’m reminded of why New Zealand is considered one of the most beautiful countries in the world. It’s not that the North Island isn’t pretty – it is! – but the South Island is truly spectacular.

P.s.: Dear tourists travelling to New Zealand for the Rugby World Cup in September: if you come all the way to the bottom of the world and don’t take the extra drive/flight to the South Island, you’ll be missing out on the most amazing landscapes ever. Consider yourself warned.

* As winter reaches New Zealand, I thought the next best thing about warm coats, hot cups of coffee and comfortable knitwear would be to remind myself of how much I enjoyed the past summer. It is also a good reminder of the good times to look forward to when the next summer comes around. Oh yes it is! This is the third post of the series.The first one was about Rarotonga and the second was about White Island.