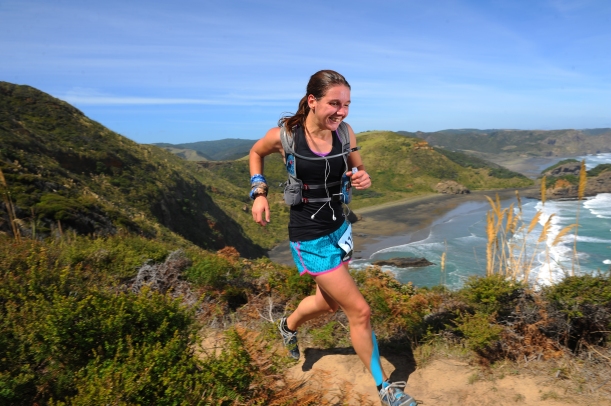 After getting cut off at Tarawera, I decided to attempt running a marathon the weekend after even though my ankle was still swollen and sore.

Stop rolling your eyes, I can explain.

The DUAL looked amazing and Tarawera entrants had been given a discount code for it. I’m a freelancer now and I’m in no position to turn down a good bargain. Plus, I thought there was a chance I could maybe perhaps who knows potentially be able to manage a marathon along paddocks, trails and rough scoria.

A mere 12km into the marathon, I fell (again) and sprained my ankle (again) right near the top of Rangitoto (again). My “marathon” ended up turning into a 12km run (a pretty good run if I do say so myself) with a few hundred metres of hobbling to the closest aid station for a ride in an ambulance back to the start line (thank you Gary who stayed with me until I managed to get up from the ground and the awesome volunteers at the aid station who made sure I stayed comfortable while I waited to be taken back to the start). So that finish line on Motutapu was going to have to wait another year.

That brought the total of finish lines left uncrossed up to two in just two weekends – a less than ideal state of affairs for someone who, until recently, was pretty proud to claim to never have had a DNF. With the first ever Hillary event just a week after the Great Motutapu Disaster of 2014 and my registration for the 34km already paid for, I decided to ignore all the super smart people that kept telling me it was time for a break and, instead, compromised by downgrading my entry to the 16km event (from Bethells to Muriwai Beach) because, even though my ankle was back to being the size of a golf ball, I couldn’t bring myself to miss out on the first ever Hillary event.

The Hillary is a pretty special place. There’s probably no better way to pay tribute to the legacy of Sir Ed than running or hiking that trail (aside from maybe climbing Everest which I intend to do at a quarter past never going up those hills). The Waitakeres are also my local playground and where I do most of my training runs. I’ve done a lot of bitching and moaning along that trail, had some pretty massive meltdowns going up some of the hills and smiled and laughed my way along some of the downhills. As a trail runner, the Waitakeres are my home. Having so many people come from all over the place to run along those trails was like having some really honourable guests visiting your home. You want to be there to witness their jaws drop at the beauty of your backyard.

Also, I badly needed a finish line. As much as I can try to be rational about it and tell myself that it’s totally justified and that I shouldn’t even have started the marathon after the ultra with my busted ankle, the truth is that those two finish lines that I didn’t get to cross, in just two weeks, were a bit of a blow to my confidence.

Timing wasn’t perfect but someone has to keep Rocktape in business so I strapped the hell out of my ankle and made it to the start line at Bethells, where I got to catch up with a bunch of friends. The sun was out, I was in one of my favourite places and a mere 16km away from the finish line. It was going to be a good day.

Te Henga – the track that links Bethells to Muriwai – is a pretty technical piece of trail, far from ideal for a sprained ankle. I took my time along it, really focusing on each step. It was a hot day and I knew that going extra slow meant staying longer under that hot sun but I needed my ankle intact for the inaugural Riverhead Rampage the following weekend (so many cool events, so few healthy ankle ligaments).

I’d done the Te Henga track a few times before and knew that the steps up to Constable Road would be my absolute least favourite part – but I also knew that it is one of the most stunning pieces of trail in New Zealand (in the world, actually) and that no amount of ankle pain is enough to make you unhappy when faced with those views. I MEAN, LOOK AT THAT PHOTO. If you want to feel lucky about life, even when everything else looks a little shit, head to Te Henga. It cures everything.

In spite of the mental exhaustion of having to watch every single step along the trail and even though I had to downgrade to the shortest distance, I’m sure my decision to still run the Hillary event was the right one (hashtag things I don’t get to say very often). I had some pretty good moments along the trail and, even when I felt less than amazing, there was always something to be happy about. At one point, as I was stopped on the side of the trail wondering why I wasn’t home doing a sudoku or something a little less challenging, a trail runner I’d never met stopped and handed me a chocolate bar, saying I looked like I needed it. His act hasn’t shaken my belief that sharing chocolate is craziness but it was one of those gestures you only see happen on the trails. So how can I not love this thing, golf ball-sized ankles and all?

Slow step after slow step, I reached Muriwai Beach, where I realised I was finally going to cross the finish line I so desperately needed. It was all ok. I wasn’t a complete loser, just a runner with a sprained ankle, an incredible lack of self-control and a credit card statement with too many running events listed on it. BUT HOW COULD I NOT? I MEAN, LOOK AT THAT VIEW.

I crossed the finish line, got my little fridge magnet medal and Steve, who had to pull out of the 80km with an injured foot, was there to support the rest of our running family. I spent the rest of the afternoon sitting in the sun cheering for everyone who came across the finish line and was stoked to be able to see some friends finish, including Glenn who ran the full Hillary after Tarawera and the full marathon at the Dual (you should read his Hillary report, but don’t believe the bit about someone trying to poison him with warm beer. I drank it and it was fine).

It took Shaun Collins and the Lactic Turkey Events team a good couple of years of hard work to get this event approved by the Auckland Council. The council finally allowed the event to happen this year on a trial basis and with stringent measures in place to prevent the spreading of Kauri Dieback.

Like everyone else in the trail running community, I hope this event becomes an annual one. It has the potential to become one of the most significant events in the trail running calendar in the country, showcasing some of the most spectacular pieces of trail in the world (tourism dollars, we like ’em, am I right?). Not only did it have all measures in place to prevent Kauri Dieback from spreading, I’m pretty sure it actually raised a lot of awareness of the issue. Trail runners want Kauri Dieback gone as much as anyone else (I’ve never seen a trail runner run past a spray station in the Waitakeres without stopping to spray their shoes, regardless of how fast they’re going). The truth is that you’ll be hard pressed to find a community that loves and cares for the trails as much as this one so turning down a trail running event for fear of spreading Kauri Dieback is a bit of an oxymoron (emphasis on moron).