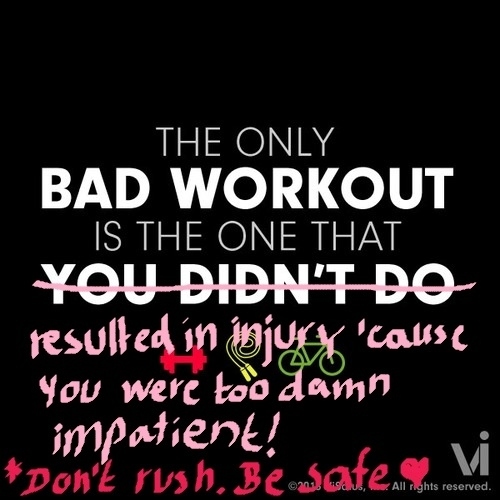 Buzzfeed got a bunch of fitspo qotes and fixed them. All the others are here.

I’ve ran a grand total of 5 painful kilometers in the last week and a half so, naturally, it’s time to get my rant on.

I’ve been doing what I can to be a good runner and look after my injured leg. And what I can do is not run. Except not running is turning me into a miserable bitch so it’s basically been a choice between a leg that moves painlessly and a brain that isn’t subconsciously working out ways to hurt other people.

This is all being made even harder because of the timing of this whole injury thing. I’m not just talking about the events I’m supposed to be training for (I’ve got a relay in a month’s time and, at this stage, I’d need a relay team of 24 people just to run to the bakery across the road from home). There’s more.

You see, this weekend is Auckland Marathon weekend. Naturally, people are excited. Excited people talk about things that make them excited. Excited people talking about things that make them excited expect their excitement to be met with excitement too. Getting excited about marathons is hard when you have limbs threatening to crack.

(That said: go you good things! I’ll be cheering for you from wherever I am, probably sitting down feeling sorry for myself.)

Also, the weather is getting warmer, which would be great if I wasn’t hating on everything right now. Like all “lifestyle” articles popping up about getting in shape for summer. Nicer weather has brought a bunch of seasonal runners out to the streets, those “trying to get in shape for Summer” types. Regular running Vera would find that pretty cool, yay for people focusing on themselves! Injured-no-running-hates-everything Vera sees them as she drives past on her way home to put ice on her leg and wants to yell at them to get their stinky running shoes off her reserve.

And yes, I judge you if you’re running around the park because Summer is coming and you want to look good on the beach. I judge people who talk about getting ready for “bikini season” because that’s the type of superficial crap that doesn’t help anyone make any permanent change that’ll actually make them feel better about themselves.

The other day, the lady who comes to sell sandwiches at lunchtime asked why I wasn’t buying a cookie with my sandwich. Before I had time to explain to her that I’d been sent some chocolate that I’d been working on all morning, she told me “probably for the best, Summer is coming!” and since I don’t understand why my cookie intake is in any way more related to the change of seasons than to the phases of the moon or changes in tides, I went ahead and bought the stupid cookie anyway.

(Maybe that was her plan all along? Well played, lunch lady, well played.)

The “getting fit for Summer” thing annoys me more than I care to explain. As a side-effect of trying to fit into a bikini that is not their size, some people will get a bit fitter. But fitness is a consequence they’re not even thinking about. They want the thigh gap and the flat stomach that doesn’t hang over their bikini bottoms. Once Summer is over, they won’t see a reason for their gym membership anymore. So their excuse to be out there running around my reserve while I have to go home and cry about how I can’t run is actually pretty stupid. Also, your leg doesn’t hurt and mine does so, naturally, I want you dead.

(I warned you I was bitchy.)

Lesson: If you’re going to get a running injury, don’t do it when you’re about to start freelancing from home and you’re so stressed about that life change it actually makes you want to vomit.

I’m finally off to get my xray today. In the meantime, I’ll be staying away from fitness websites for a while because motivational quotes are starting to drive me insane. No, internet, I most definitely should not be running right now. And I’d really appreciate if you stopped trying to make me feel like crap about that.