On Saturday, I ran 33km through Riverhead Forest so I’m putting all my half-written posts on hold to tell you about that even though you didn’t actually ask.

It was a tough day. I knew it was going to be tough because most days have been tough lately even when they don’t include exhausting long runs. But I wanted and needed to be tougher than it.

I don’t even want to count on many days to go until the Kepler Challenge because I wouldn’t want to have a panic attack three paragraphs into a blog post but the fact is that I’m running out of time to feel sorry for myself and need to face the fact that you don’t train for a 60km run just by searching for photos of the track on the internet. But this running thing is really difficult sometimes. And the track, by the way, is really insanely pretty.

But anyway, back to Saturday.

The first ten or so kilometres were the hardest I’d run in a while. I started with a sore foot because it seems to be damn near impossible for me to ever run (or walk or do anything useful) without hurting myself. While the foot was a handy excuse to keep taking legitimate breaks (pro-tip!), it was, as usual, my head that wanted to give up all the time. I felt terribly guilty for the group of people I was with, all training for their own races and having to stop to wait for me when they could just be getting into the flow of the run and enjoying themselves. If this had been a road run, I would have Uber-ed my way out of there in record time. There are no taxi services out of the trails for broken runners, though, so there’s a free million-dollar business idea if you’re looking for one. 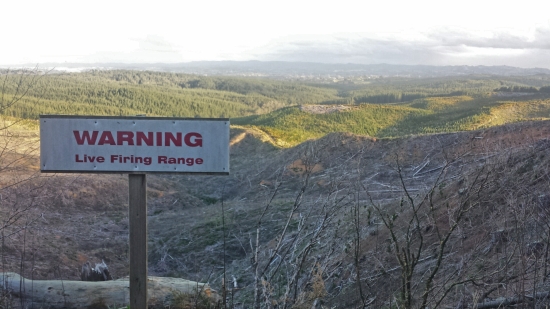 I didn’t even take this photo on Saturday because I took zero photos on Saturday but here’s a photo of Riverhead from a different run. And you wouldn’t even know this photo wasn’t from Saturday if I hadn’t just told you which means you can always count on me to tell you when I’m trying to bullshit you.

At one point, it all reached a new level of awful. I had over 20kms ahead of me if I wanted to keep going with them but my head was telling me I could not handle a single step into that forest anymore. Even the thought of returning to the car on my own was daunting because it involved having to keep on moving which was the one thing I was dying to stop doing. I felt paralysed. Without knowing how to deal with it (because who the hell knows how to deal with this level of difficult shit?), and after failing to get me to make up my own mind about what the hell I was doing, one of the friends told me to remember that it was all about putting one foot in front of the other.

Except what I really wanted was to not move. I wanted it so desperately I didn’t even care that not moving meant sitting in the middle of the forest all alone.

Not knowing what to decide, I decided not to decide anything and just do as I was told. I convinced myself I was doing it for the others (so I wouldn’t ruin their run) and that seemed to trick my brain into choosing to move. So I did – one foot in front of the other.

I couldn’t stand thinking about the entire distance we were going to cover that day. I couldn’t look ahead and see the inclination of the track without feeling dizzy and sick with fear. All options sounded unbearable so I just chose to look down at my feet and focus on their movement. When we veered off the forestry road and into the trail, I had no choice but to pay attention to the obstacles ahead.

Surprisingly, it was focusing on those that brought me back up from the fog I was in. Every little branch or tree root I ran over without tripping felt like a tiny victory and I kept collecting those along the trail. It wasn’t long before I’d gathered enough of those to feel a bit better and to start thinking that maybe I wouldn’t have to ruin everyone’s run that day. One foot in front of the other.

At 20km, I was finally running happy, thinking about nothing but the run. At 30km, I wasn’t even close to wanting to stop. I felt fresher and more energised at 30km than I had felt in the first 10km (and if you think that doesn’t make sense, I’d like to remind you that I live in a country where the Air Force logo is a flightless bird).

That’s the beauty of the trails, really – they’re merciless. They’ll help you get through anything but there’s no kindness out there on them. They offer no shortcut, no easy way out. Once you get yourself there, you’re doing it. If you want to give up, good luck – you’re deep in the middle of lorde-knows-where and the walk/run back will be the same length you already did going in so why don’t you just harden up and keep moving forward anyway? There, like everywhere, the only way to get out of a bad situation is to keep going. One obstacle after another, you keep getting past them and can’t even tell you’re getting stronger. Next thing you know, you go from throwing a tantrum about how you can’t take another step to taking a giant load of them and realising you could, by focusing on that forward movement and taking it one step at a time.

I’m pretty sure running is the answer to everything. You should probably never invite me to be part of your pub quiz team.