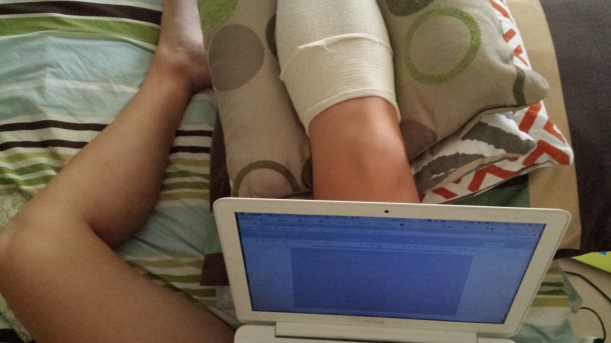 Lying with your leg raised above your heart definitely shouldn’t be a part of your ultramarathon training.

Let’s get something out in the open now: I’m not great at dealing with huge amounts of pain. Or minimal amounts of pain. Or mild barely-noticeable discomfort. If you’ve run with me before you know I spend approximately 50 to 65% of the run complaining about different aspects of it. No one runs with me and wonders whether I’m enjoying it or not. They always know I’m not. And they know so because I provide them with extensive commentary on the many ways the run sucks.

But even I will admit that sometimes I do exaggerate and not all runs suck. My run on Sunday, however, sucked on a large number of levels. A plethora of levels, if you want to be a snob about it.

You see, I was really looking forward to coming here and making you all jealous about how I live within a half hour ferry ride of a 600 year old volcano where I can go to do my run/complaining about running combo whenever I want. That’s precisely what I set off to do early on Sunday morning.

But then, PLOT TWIST. Six kilometres into the whole thing, as we were making our way back down from the summit, I failed to notice one of the steps and fell pretty spectacularly, flat on my face on a boardwalk, thus ending a good, hmmm, let’s see, week and a half of running without any sort of pain.

And that was just the initial 40 seconds.

(I know that’s a lot of detail but I need to make sure my future biographer has enough to work with so bear with me here.)

Forsyth, who was running behind me and clearly has his priorities very well defined, paused my Garmin immediately (and managed to do so while I was screaming so badly it sounded like a Rebecca Black song). Steve, who runs downhill at about 460kph (give or take a few hundred kph) was so far ahead he couldn’t hear me yelling in despair (unlike everyone else on the North Island and potentially the good people in Australia as well). A couple of hikers caught up with us while I was busy fighting for my life right there on the ground (ok, sort of) and the man walked down to find Steve. He ran into a DOC worker with a truck who walked up to meet us and offered to take us back down to the wharf. I would have hugged him with relief but, at this stage, I was still lying on the boardwalk.

To cut a super-long story slightly shorter but still fairly long, Forsyth piggy-backed me out of the track (he’ll tell you he “carried me down a volcano” and, while not entirely untrue, you should know the truck was about 200m from where I fell) and the lovely man from DOC took us down to wait for the ferry. Since it was only 10:30AM and only losers who smash themselves on the ground need to be taken off the island so early, it was just the three of us on the ferry. The good part: according to what the man announced over the microphone thingy, should anything go wrong, they had about 75 life jackets per person on board for us and the guy suggested we could “throw them all out in the water at once and build a raft”. Instead, we spent the journey back eating cake and drinking beer while Steve and Forsyth worried about the sort of impression I was going to cause in the emergency room, with a potential broken foot and smelling of booze. But I don’t think the emergency room is the place to worry about making good first impressions so I went ahead and drank it anyway.

The hospital part of this whole adventure had some good Kiwi moments, like the nurse deciding that I didn’t need to have my blood pressure checked after all, because the machine was out of battery. “Yeah, you look alright”. I’M NOT GODDAMN ALRIGHT. I’M IN A WHEELCHAIR.

But I actually kept my cool about that. What really pissed me off was when she asked me to describe what happened:

Vera – So I was running down from the summit of Rangitoto…
Nurse (writing down on a piece of paper) – Okay, so walking down…
Vera – No. Not walking. Running.
Steve – Well… It was more like jogging, really.
Vera – I WAS NOT JOGGING.

(I was probably jogging.)

I tried to describe things a bit better in the form they gave me to fill out but, once again, Steve wasn’t much help. When the form asked me to tick the box describing the type of activity and I had to choose between things like “work”, “leisure” or “sport”, I went to put my tick on “sport”, to what Steve said: “I’d say leisure. You weren’t being that sporty.” This is the same man who also told me my description of the accident on the hospital form was “no Hemingway” and told me to “break a leg” when they wheeled me into the room for an x-ray.

Anyway. I got myself a nice little ligament sprain on my right ankle and have had to learn to walk with crutches for the first time in my life. I’m not a fast learner and my “good foot” has banged on one of the crutches twice so far. I can’t even hold a cup of coffee and stand upright at the same time so that’s all of my good party tricks taken away in one go. Showering has also been interesting, since one of my feet can’t touch the ground (come on, don’t act like that’s the weirdest thing I’ve ever told you here). So, before you ask, recovery is going swell.

The only bit of good news I have is that my first physio appointment today went pretty damn good. I got told I was doing “everything right”, which is something I don’t hear very often (or, you know, ever) and the nice physio lady told me I can maybe probably potentially go for a really short run in a couple of weeks. A couple of weeks from now will be a month from my ultramarathon so you do the maths to figure out the square root of how screwed I am.

It’s bad, you guys. I’m Keanu Reeves-sad. My last post here bragged about running over 70km in 48h and I’ve now spent the last 48h relying on people to help me do pretty much everything. I’m not the most elegant person on crutches and I’ve realised I wouldn’t exactly be a role model if I ever had the misfortune of having a permanent physical disability.

To top it all off nicely, I finally met Julian last night while he was up in Auckland for work. Few things are worse than getting injured and catching up with a runner who’s just been given the ok to run for the first time that day after 7 weeks of injury. But whatever, it’s this sort of adversity that builds character, amirite? And also, I hopped my way into the brew bar (hopped, hops, Jesus, I’m like some kind of pun genius right now), drank three delicious beers and forgot about the pain for a bit.

But now the pain is back. And I’m still lousy on crutches. I continually bang my leg on them and continue to insist on trying to carry stuff in my hands while using the crutches which means everything I touch becomes damaged in some way, like some kind of ridiculous inverse Midas effect.

I know what you’re thinking. Poor SGG, let me send her some get well soon cookies and some speedy recovery chocolate.

Yes, you should definitely do that.

38 thoughts on “Free advice: Don’t get injured seven weeks before an ultramarathon”