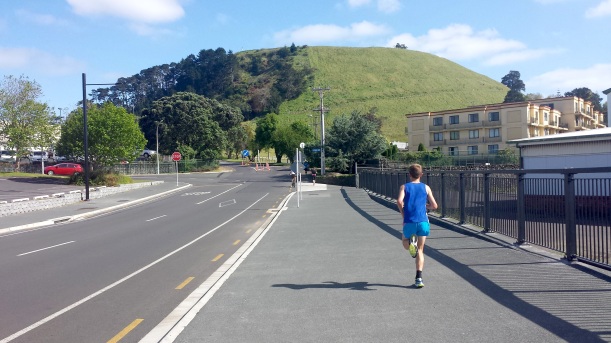 Silly mother nature putting volcanoes in the middle of what could be a perfectly nice flat route.

Here’s the thing about living in Auckland: there are a crap load of volcanoes all over the place (about 53 of them so far, but who knows when others might join the party). We live in constant fear that an eruption will cause us to spill our soy lattes all over our overpriced rugs.

But on the other hand, those volcanoes mean lots of nice views of the city, which is pretty much all you have to look forward to in life when someone decides that one of those beasts should be at kilometre 18 of your half marathon. Like yesterday, at the Panmure King of the Mountain half.

This is apparently a pretty iconic Auckland race (you can read more about it here to save me all the paraphrasing). There was a bit of a hiatus but the race came back this year and, even though I made a solemn promise to never again enter events with “mountain” in the name, I went ahead and registered, for some reason (the reason being that I’ve got the self-control of a lab rat).

It was all a bit uncertain for a while. After the Waitakere Half, I decided to be all responsible and didn’t run a single kilometre for an entire week. Believe it or not (and I can’t blame you for not believing it), I was genuinely considering skipping this half in favour of doing the responsible thing and continue to give my leg a proper rest. But then two things happened: 1. I didn’t have any pain in the couple of days before the event and 2. I randomly got bib #1, which had never ever happened before.

Now you ask “what difference does that make, you fool?”. Absolutely none, of course. But I really wanted to run it anyway so I took the whole bib #1 thing as a  sign.

And here’s something I don’t often get to say about my decisions: it was a good one.

No clue what I was laughing at but here’s a photo of my #1 bib because I’m a giant show off.

It was a pretty tough half for me but the pain in my leg wasn’t actually much of a pain in the ass, for a change. In fact, it completely disappeared about a quarter of the way through so I can’t even use it as an excuse for my slower-than-usual time. Actually, I’ll half-blame it on it. This bitch of an injury (will give it a proper medical term once I get around to getting the x-ray done, promise) meant that I didn’t get any decent training done in the last month or so and I definitely feel the loss of fitness.

I tried to go slow and not mistreat my leg too much, just in case. For a while, I couldn’t see any other runners anywhere and was fully convinced I was the absolute last person on the course. I had a brief “what’s the point?” moment but then realised that I never race anyone other than myself anyway and so kept going at my slow let’s-try-not-to-make-this-worse pace. Instead of worrying about my time, I focused on enjoying the scenery which, aside from a bit of boring suburban running, was pretty damn nice.

Luckily, the bit I had to run on sand was pretty short, otherwise this recap would include some pretty ugly words.

I can’t tell you how happy I was to give myself a mostly pain-free half marathon. It was the perfect reward to a week spent desperately wanting to run but choosing to do the right thing and staying home icing my leg instead. I missed pain-free running to the point of forgetting how it felt like. Turns out, it feels amazing, even at  slower pace. So I guess all that rest last week was good for something and if not running for a while means I get to enjoy running again the way I did yesterday, then I’m all over that idea.

So, just so you don’t think you’re wasting precious bandwidth on this for nothing, I’ll go ahead and say it: you were right.

9 thoughts on “Panmure King of the Mountain half marathon recap”