I didn’t have the absolutely perfect first marathon experience. Things went well and I finished it but not without an injury that has put me off running for most of the last 3 weeks (almost back, running shoes, I swear!). This means I probably shouldn’t be giving you advice on marathon training, right? Well, wrong. This is the internet. Anyone can have an opinion. Knowing what we’re talking about is irrelevant.

I’ve read approximately a bazillion words on the internet and in books about how to train for a marathon and how to go from wanting to run a marathon to actually doing it so, for lack of anything more interesting to say, here’s a bit of a compilation of stuff I figure is pretty important when trying to tick this item off the bucket list.

The first thing to do is pretty obvious: pick a marathon. Any marathon. But really, settle on it. Decide you’re going to do it. That’ll be your run. Register. Give them money. There you go, now you’re committed. Unless, of course, you back off and ask for a refund. Wuss.

Don’t ask for a refund. Instead, tell everyone you know that you’re going to run a marathon. Yes, everyone. It’s out there now. You’ve gotta do it. People will start asking how training is going and all that stuff. Do you wanna be all like “oh nah, kind of got over that”? Didn’t think so. Verbalising your intentions, unlike what some people think, is not about bragging. It’s about motivation, commitment and taking responsibility for your actions, owning up. Ok, maybe it’s a little bit about bragging too. But you’ve been running your ass off, brag away.

Now that you’re fully committed and you know exactly which marathon you’re running, it’s time for what is quite possibly my favourite step in the whole thing: obsessing! Study that course, examine the elevation chart to the littlest detail. And then, of course, plan your training runs accordingly. You’d be silly to run a hilly marathon without some hill training under your belt, for example.

Find a training plan that works for you or design your own. It’s important that running doesn’t take over your life completely and doesn’t affect other aspects such as work or your social life (it’ll inevitably have some sort of impact on that but you should try to minimise it as much as possible). Make a spreadsheet or note the training sessions down in your diary. If it helps you commit even more, find a running partner or join a running club.

5. Run often but not too often

Finding this balance is perhaps one of the hardest parts of training. A lot of words have been written about the importance of taking rest days so don’t feel guilty about not running. Weekends, however, are for long runs. Break this rule and you shall suffer eternal damnation. Well, or just sleep in anyway, eternal damnation be damned, it’s not like anyone is paying you to get out of bed on Sunday to run. Just keep in mind that you need to work on your endurance and days off work are the best time for that. Plus, you can always take a guilt-free long nap after each long run so just suck it up.

You think training for a marathon is all about running? Think again. Head to the gym, the swimming pool, the yoga studio, the bakery. Ok, not the bakery. I mean, the bakery too but, really work all the muscles, not just the legs and not just the stomach. I stopped going to the gym for ages and found myself having more upper body pain during a long run than leg pain. Your whole body needs to be prepared for this. 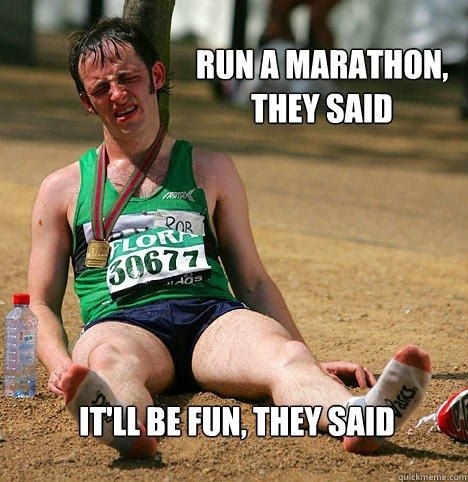 7. Watch what you eat

You’re not going to have a very good time during that marathon if you keep eating the way you’ve been eating (unless you’ve been eating well this whole time in which case I’m terribly jealous and please tell me how you do it!). Put down the Creme Eggs (or send them to me) and eat more of the good stuff. For actual tips on what to eat, head here, for example. I’m eating chicken-flavoured chips while I type this so I’m really no example. It’s important that you keep in mind that you’re not on a weight-loss diet. You’re eating to fuel up for long runs. There’s no room for guilt, but plenty of room for an extra piece of cake.

Consider entering other running events. A half marathon here and there won’t hurt and it’ll keep you in check throughout the training process. That said, don’t underestimate the power of your weekday short runs. A 5k can take you a long way. Well, it can take you 5k away, but you get my point.

I know running is all about doing whatever you want and it’s good because it’s cheap and all that stuff but let’s face it – we’re talking about a full marathon, not a jog around the block to the bakery. Get serious about it. Consider getting your shoes fitted. I know it’s not everyone’s thing and some swear by the whole “you can run on anything” philosophy but proper running shoes have saved my ass (well, my feet and knees) multiple times so I’m all for spending that money.

Get all your testing done before marathon day and try nothing new on the actual race. Test your gels, your electrolytes, whether your running watch annoys you on that wrist or not. Are those shorts comfortable? Is it likely that you’ll be chafing? Are the sunglasses going to be a nuisance? Test it all in advance so you know what you’re in for and you can minimise some of the issues.

Tapering week is all about not running (and not going insane). It’s also about planning for the big day. In my case, the marathon was out of town and it involved a road trip and a night away in a motel. Packing was important because I wasn’t going to have all my worldly possessions on hand on that day. Other than the usual stuff you pack for a weekend away, I had to remember the stuff for the race. I chose to run with a hydration pack that included nuts, Gu, chips, Nuun, jelly beans along with my knee brace and a small first aid kit. I was pretty prepared (and the extra weight didn’t bother me as much as I thought it would). You might not want to carry as much with you but it doesn’t hurt to keep these things nearby, just in case you change your mind a couple of hours before the race. I didn’t end up using all of that stuff, obviously, but I’d have had to pull out of the race if I hadn’t had my knee brace in my pack, for example. In the end, the nuts and chips went untouched. I had 4 Gu gels (at 8k, 15k, 26k and 34k) and a whole lot of jelly beans from then on, but it helped me to know that I had a bunch of stuff handy if I needed it.

12. Run the hell out of that marathon

When I train for my next one, I’ll definitely have to up my game on some of these, namely eating better and cross training more. And maybe tone down the whole “telling everyone about it” bit because I don’t want to put my friends through the hassle of having to change numbers and addresses to avoid me.