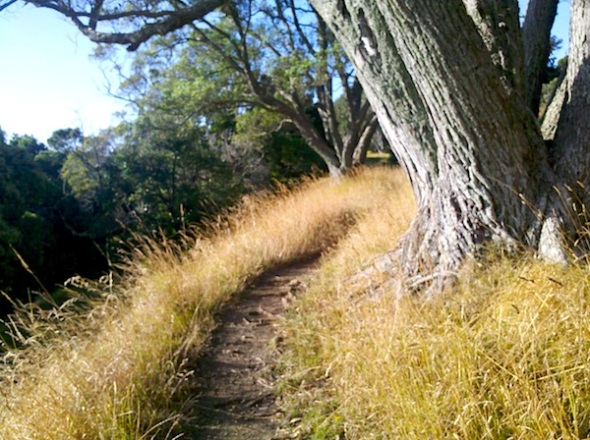 I took about ten photos along the run but they were all as grainy as useless as this one. I need a better phone for photos along my runs. And a hundred photography courses. Also, it was a road run, don’t let the photo fool you. There were only a few hundred meters like this.

Six hours of sleep, two pieces of toast and a chocolate croissant (don’t take nutrition advice from me) and we were on the road, bright and early this morning. We had water in our hydration bladders, some trail mix in our packs and a vague idea of the route we were going to take.

Thirty-two entire kilometers later (20 miles for you non-metric system adopters), we were at the dairy back near the start, getting a cold coke and celebrating our longest road run to date. Neither of us had run more than 21km since that epic day last May and neither of us had ever done more than 21km on the road.

It wasn’t the easiest of starts. I didn’t feel like getting out of bed when the phone started going off at 6AM. I wanted to close my eyes and ignore all sounds (actually, I wanted to throw the phone against the wall but I showed enormous self-control and just got up instead). I didn’t want to do it. At all. I wanted to get up at 10AM and slowly make breakfast and watch the Come Dine with Me omnibus. Instead, I have no idea who won Come Dine with Me this week (!!!) but I ran 32km before lunch instead. As hard as it is to get out of bed, I don’t think that was a bad trade off. Also, I learned a few things this morning and I bet you’re dying to know what they were (just nod in agreement, it’s fine).

1. I can (prolly maybe) run a marathon. If it goes anything like today, it’ll be really enjoyable for about 20km, fairly enjoyable for another 5km. Then my feet are going to start burning and it’s going to suck really bad, getting progressively worse as my legs decide to join the feet’s pity party. I don’t know how the remaining 10km will go, since we stopped at 32, but I’m fairly sure it’ll be shit. But hey, it’ll be done! (BRB, going to look for some wood to knock on!)

2. The trails are a lot nicer on the soles of our feet (and I suspect the body in general) than the road. I know we’re supposed to do road work for a road marathon but I really started missing the trails towards the end, with every painful step on the solid road.

3. Baz Luhmann says everybody’s free to wear sunscreen. I wish I remembered this more often. Sunscreen and vaseline are a runner’s best friends in summer. It doesn’t matter how well adjusted the backpack straps are, those little bitches always ends up rubbing on my neck and making it hurt on a long run.

4. Breaking the distance down in my head remains the best strategy for any long run. I may have run 32km but, in my head, I actually ran a half marathon and then, after that, a 10km run. It might all add up to the same but, in terms of my attitude, it makes all the difference.

5. 1L of water is most definitely not enough water for a run this long.

6. Maybe my legs wouldn’t have felt so heavy if I had remembered that I had a Gu in my backpack. I didn’t. The final couple of kilometers were a bit of a metaphor of Dante’s Inferno.

7. I’m perfectly happy not having any music out on the trails but I definitely can’t run very far without music on road. I’m not even sure this is weird. I guess the sound of traffic doesn’t have the same soothing zen-like effect that the sound of nature does.

8. Just because you can run for 25km without pain, don’t make the mistake of assuming that maybe, just maybe, that’s how the entire run will go. Pretty soon after that smug thought, everything will start hurting. Everything.

9. Despite being our longest road run to date, there wasn’t much fuss about it beforehand. We decided to do it just earlier in the week and there was no massive preparation or stress around it. We just went and did it. It’s not the first time I am led to believe that the whole “just do it” stuff from Nike is more than just marketing. Those smart cookies might have a point.

10. Sweat between your toes making them rub against each other and burn. This happened. It wasn’t pleasant. I just wanted to leave you with that mental image.

Despite the pain, it was an awesome run. I got home feeling all badass and stuff but was called back to reality when I couldn’t open the bottle of olive oil on my own. Apparently, I’m still a little bit of a loser. But this loser ran a really long way today. So there’s that.