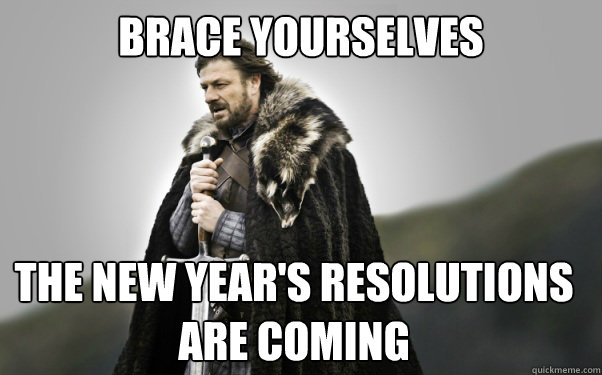 It’s that time of the year again. Yes, that exciting time when you make a bunch of plans and compose a list of things you will achieve in the new year. All of a sudden, life seems all organised and put together and you feel like you have it all under control and exciting times lie ahead. Then comes the new year celebration and the resolutions get forgotten down that third bottle of cheap sparkling wine.

Grab the cheap sparkling wine, call it champagne like I do – it’s time to write those resolutions down.

I’ve decided to keep it simple this year. It was the formula I used last year and it seemed to have worked. I’m not going for huge unattainable goals here. If I bag some of those, bonus. But that’s not what I’m going after. Resolutions are about motivation and there’s nothing good about setting myself up for failure with big scary goals. So here’s 13 things I want to focus on this year, in no particular order:

One Hike the Tongariro Crossing again. It is still my absolute favourite day hike in the country, in spite of the horrible second experience I had on that mountain. Time for a third go at it.

Two Run a marathon. This one is sort of cheating because it’s already lined up. But hey, it doesn’t count until I’ve crossed that damn finish line and, right now, that’s looking pretty unachievable.

Three Volunteer at a running event. It’s time to give back, even if giving back just means giving people plastic cups full of water as they run past.

Four Run an ultra-marathon. Let’s talk about this one later. It requires more than one bottle of cheap wine.

Five Enter as many XTERRA trail running events as I can. And basically every other trail running event within an acceptable radius from home. Essentially, I want to run events at a faster rate than Taylor Swift changes boyfriends but I do realise that might be a bit hard to achieve.

Six Dust off the camping gear. I haven’t camped since the beginning of 2012. Enough of this roof over my head kind of stuff.

Seven Discover 5 new authors/ read 5 excellent books. It’ll take me a few average reads to get this number but I really want to get to the end of the year with some new favourite books. 2012 was not a bad one in that sense but there’s a lot more to discover out there. Got a favourite? Let me know!

Eight Do a 30-day photo project. It’s all about discipline, people. And I need lots of that.

Nine Go to the gym at least once a week. This year, I shamefully paid for at least 5 months worth of gym membership without showing my face there. Then I went back, tried weight training and kind of liked it. So more of that in 2013.

Eleven Add more recipes to my recipe journal. I’ve been real lazy writing them down. My future offspring – if cats can be called offspring and ever develop the ability to read – needs to know how to make the perfect packaged meal or precisely how much cheese to add to <insert any food item in the universe>.

Twelve Buy my groceries online. I don’t know why I’ve been putting this off for so long. I like picking my own stuff from the shelves. But I also like staying home and not have idiotic children bump their trollies onto my legs. So I think that wins.

Thirteen Declutter (but for real, no mercy). About 5 years ago, I reduced my entire life to 2 suitcases and moved to New Zealand. Those 2 suitcases magically expanded into, well, a buttload of stuff. No human being needs the amount of crap I’ve accumulated over time. Time to scale down. You get to read all about it here, just to keep me motivated. I know, riveting stuff. Try to contain your enthusiasm, kids.

So there. I’m sure lots more will happen but these are just a few things that’ll keep me motivated once the January 1 hangover is gone and all the After Eight mints have been consumed.

What are your plans for 2013? Tell me all so I can either nag you about them throughout the year or feel less sorry for myself when I see you’re doing just as badly as yours as I’m doing at mine.