This Christmas will be my third one in the Southern Hemisphere and, therefore, my third Summer Christmas. You’d think I’d be used to it by now but… nope. Nice warm weather in December will never make sense to me and a Summer Christmas still sounds like a big paradox.

Christmas has always been my absolute favourite holiday, even though it always used to take place in my least favourite season. I initially thought that perhaps combining Christmas and Summer would make my head explode with happiness but that hasn’t happened.

It’s not that I have a bad time over Christmas in Summer. It’s just that it doesn’t feel like Christmas, at all. Words always have a variety of feelings associated with them and, to me, Christmas means warm coats, short days, the smell of pumpkin and cinnamon and all the other ingredients of the traditional Christmas food we have back home.

Instead, for the last three years, I’ve been wearing shorts and going for walks on the beach. I know it sounds like a massive first world problem – poor wee Vera has to go to the beach over Christmas, boo hoo, yadda yadda yadda. I know. But, as nice as it is, it doesn’t feel the way it should.

Some things, however, make it all a bit better. I intend to fill the house with the smell of anything pumpkin-related, decorate the hell out of it (and spend December vacuuming pine needles off the rug or chasing the cat to make sure she doesn’t swallow the tiny ornaments she grabs from the tree), eat as many pieces of french toast as my body can handle (in Portugal we call them “rabanadas” and they’re a traditional Christmas dish), crank out the Mariah Carey (don’t be hater, nothing says Christmas like All I Want for Christmas is You) and take part in as many Christmas-related activities as I can. 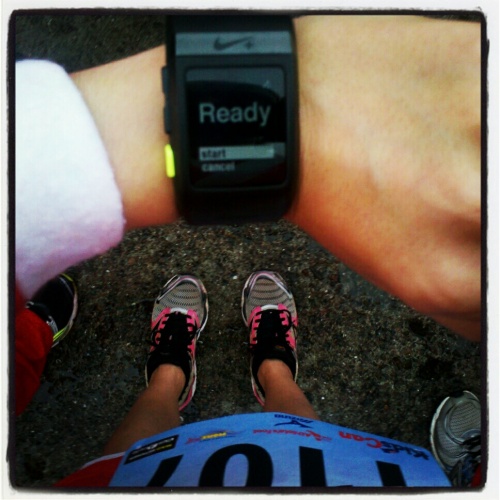 Like yesterday. For the first time, I was happy to be going out for a run in the rain. It was time for another Auckland Santa Run. Last year, we’d had good weather for it but, this time, even though the temperature was warm, I had the rain to make it feel a little bit Christmassier (yes, that’s totally a word).

About 1400 people dressed up as Santa and ran the ~3k course in Auckland central in the rain (at the same time as other thousands of Santa runners did the same in different cities and towns across the country), all for a good cause. It was a short run but you should never underestimate the added difficulty of running in a santa suit (there was nothing breathable about that material, I tell you) – so, by the end of it, I definitely felt like I had worked enough for some french toast. I mean, rabanada.

5 thoughts on “Chasing my Christmas spirit”