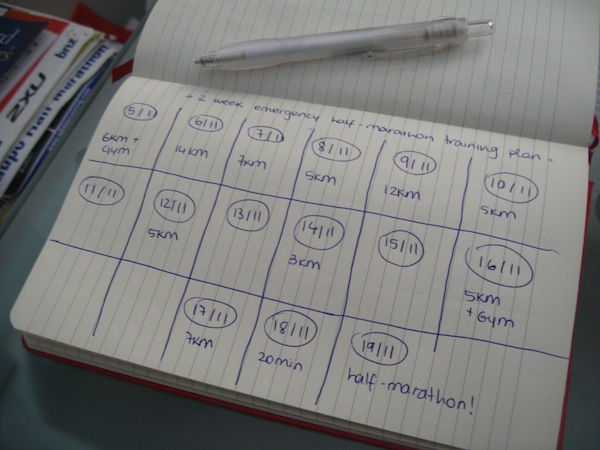 Oh heck, I should just accept that this is becoming a running blog, shouldn’t I? Don’t worry, regular broadcast (if there ever was one) will resume soon but, these days, running is pretty much the most important thing in my mind.

You wouldn’t think so, though, if you looked back on my running calendar and saw how little training I’ve been doing. Yes, I’ve gone for lots and lots of runs but they’ve mostly been short ones and the truth is that I haven’t really been putting much thought into the fact that OMG I’m running another half-marathon in exactly two weeks!

I was looking at my workout calendar for the past couple of months and the longest runs I could find there were a couple of 10km ones.  I think I got stuck in a “It’s only in November” state of mind and didn’t really get out of it. A couple of days ago, someone asked me when my next half-marathon was and I said “it’s only in November”. Two seconds later, the little “oh shit!” speech bubble was hovering over my head.

I now have basically one week to get ready for those 21km in Kerikeri. I also have an average of 1,666 words to write for NaNoWriMo between now and half-marathon day, as well as a four-day trip to Samoa, a concert and a couple of dinners with friends. Oh yes, and the whole full-time job thing, which means training/NaNoWriMo/social life are a no-go on weekdays until at least 5pm.

This morning, after a 6km run, I came home and drew up this emergency plan. It’s not something I’ll be able to follow 100%, I’m sure. Some days I’ll try to run more than that, others I’ll have to run less but writing this up helped me feel a little more organised.

My only hope is that the flat course and the weather will help will help (they don’t call it the Winterless North for nothing, right?). Also that adrenaline will kick in when I’m at the start line with all the other runners. But I’m not expecting to get a PR on this one.